Today is your first day of school. 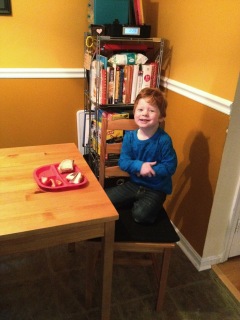 Wow, that kind of snuck up on us didn’t it?

It’s been a while since I’ve written you a letter like this.  In the beginning I had intended to write you several times a year – to document and share the ways you were growing, to put it to paper before the hustle and bustle of time pushed the details to the sidelines.  The last letter I wrote was on your second birthday; last month you turned three.  I missed a few months or so.

It isn’t as though I haven’t tried – I’ve stared down the blank white blinking curser bunches of times – I’ve just never been able to get started.

Last year after we lost your Grandpa, after your Daddy started his job, after our lives leveled out and we all took a deep breath, I took you to the doctor for the 2 year old check up that I had been dreading.  You’d had several awful doctors’ appointments in the months leading up to that one and I had no reason to expect that things would go well.  Still, the main reason for my dread was more complicated.  I knew they would be asking me questions about your development – questions that I hadn’t figured out how to answer yet.  By then you were already a mystery to me – simultaneously way ahead of the curve and trailing far behind it.

Of course, you were a perfect angel at the appointment.  You followed directions, told the nurse your name was Daniel (the first and only time I’ve heard you say your full name), you told me about the pink scrubs the nurse was wearing and talked to the doctor about the turtle in the waiting room.  When the doctor asked me about my concerns and I told her how worried I was about your speech she practically rolled her eyes while giving me a lecture about how kids develop differently in their own ways and because those words were new to me – the mother of the baby who’d done everything ahead of schedule until now – I believed her.  Your Daddy was a late talker.  No one seemed as worried as me.  I decided to give it until Christmas.

The months came and went – new words and new skills coming just frequently enough to keep really terrifying thoughts at bay.  You’d throw us just enough to keep us washed in the “it can’t be this, if he does that” phrases that keep people from making decisions.  I couldn’t write to you because I just didn’t know what to say.  Pictures are easy – just a snap shot before the melt down, just a flash that captures your beautiful expression without revealing the object you are obsessing over, just a fleeting moment that looks like it should.  I’ve had a lot more pictures than words this last year.

It was this Spring when I finally let myself see it – when I realized that no amount of adjustments to your schedule/nutrition/activity were going to make a difference without more guidance.  I remember the moment actually – you were in the bathtub coloring with a set of soap crayons (part 3 of a very specific bath time routine).  You picked up a yellow crayon and looked at me and said:  “What color is that Danny?  Yellow!  Good job!”  You methodically went through every one of them like that – the colors always right, the script never changing from the same thing you’d heard me say a dozen times.  I could understand every word you said, but we weren’t talking.  We’d gained so many words and so many concepts but we were as far away from communicating as we’d ever been.
It was only a few days after that moment in the bathtub that I was reintroduced to Child Find – the Early Intervention program through our public schools.  I’m sure I’d heard about the program before but, like so much of what we need to hear, I couldn’t grasp the information until I was ready to hear it.  I called for an evaluation and they were able to see you in June.  That initial meeting revealed that further investigation would be needed to determine eligibility for services and kicked off a summer of appointments with hearing specialists, speech specialists, child psychologists and social workers.  There were reports and tests and obstacles and tantrums.  Many late nights spent googling the various acronyms that were thrown around as my eyes blurred with tears, wondering why I’d waited so long to get started and how much the delay would cost you.
The afternoon after your psychological evaluation I dropped you off at daycare with the ladies you love so much – who love you so much – and broke down when they asked me how it had gone.  Instead of going back to work I went and sat in the front pew of our church for a long time, like I did when I was in high school, and stared at the cross.
I started to wonder how much longer I would see you and not it – if all of the adorable little quirks that make your personality so unique would just become items on a check list.  I wondered if I was making a mistake starting us down this path of special education – desperately trying to throw you a life raft without selling you down the river.
I stared and stared and waited to hear the answer to the only prayer I could muster:  Why?
It was almost a week later when the answer came in the form a phone call – the results of the psychological evaluation.  I spoke with the therapist for a long time and rather than give me the familiar list of tics and delays he went on and on about the great and wonderful things you are doing.  He told me that he could easily see how smart you are, how coordinated and strong – how happy you are.
That it was obvious to him how much you loved me.
And as I sat at my desk listening to a professional tell me that he could confidently table some of the scariest possibilities based on the depth of our relationship I started to feel a strength growing in me that I hadn’t felt in the months since our journey began. I’d spent the entire year lamenting that I had not been able to help you – that I didn’t have anything to give you but my love.  And here was this man on the phone, telling me that love was enough.
And I knew it hadn’t been an accident – not any part of it.  When my heart asked “what?”, I was ready to know.  When my heart asked “how?”, I was able to find out.  When my heart asked “when?”, the path was already before me.  When my heart asked “why?”, the answer was this:
You are not too small for Me.  Danny is not too small for Me.  I will make you both strong.  My Love can pull you through.
And because those words weren’tnew to me – the mother of the baby who defied the odds, the beautiful blessing I thought was beyond my reach – I believed Him.
Ultimately, you were found eligible for services on the basis of a developmental delay in speech and adaptive behaviors.  PDD-NOS.  Official sounding words and labels for what I’ve known all along:  you can’t communicate well, and now it’s making you angry.  We can’t explain what is happening, so routines are the only way you know what to expect.  It’s scary for you and you lash out in anxiety and frustration.

I know, baby.  And I can promise you that I won’t ever waste another minute hoping from the sidelines.  We’ve laid the path and beginning today we are all walking it together, wherever it ultimately leads.  You will find your words.  I will find my patience.

We will find the way, together.