“I mean, I don’t think we’re dealing with anything serious here, like Autism…”
I said the words hopefully, waiting for the psychologist to agree with me.  That is the way it had always worked before, anyway.  I would lay out my list of concerns and then follow up quickly with some variation of that phrase…“I’m sure it can’t be that”.
He nodded at me and smiled, his eyes full of compassion.  Because he was still in the middle of the evaluation, or maybe because he was a kind man, in that moment he said nothing.  Truly, if the news wasn’t good, silence was the only thing I was going to be able to hear anyway.
But you already know that story.  They found you “delayed”, “quirky” and of course the very important word that we were looking for: “eligible”
We’ve been looking for another, better “word” ever since.
You are a mystery, little man.  It’s been comforting, in a way, to watch professionals try to put a label on you, only to find over and over again that you are blazing your own trail.  The first 30 minutes gives everyone a different impression of you, and it’s always wrong.  It’s much later that the real stuff shines – the best and the worst, and everything in between.
My little guy who knows hundreds and hundreds of words but rarely uses them to communicate.
Who loves hugs and greets all of his classmates by name, but prefers to play alone most of the time.
Who helps set up for circle time but won’t participate in it.
Who hates loud noises but can’t help but sing Michael Jackson and Mumford and Sons at the top of his lungs.
Who can count to 30, but won’t tell you how old he is.
Who knows letters, numbers and colors but won’t tell you his own name if you ask.
My sweet, precious boy who fits the autism label to a T…until he doesn’t.

Today is World Autism Awareness Day.  For some reason, of all the various causes for awareness that have touched our family this is the one that inspires me the most.  Maybe because all signs seem to put you somewhere on the spectrum and you are the greatest cause of my life.  Maybe because you are not the only tiny soul I’ve loved who has had to face this.
Maybe because this is an issue where I think that real, honest, literal awareness can actually help.
Reaction to this word in our lives has been mixed.  Some people refuse it entirely while others want to hear a Doctor’s definitive diagnosis before taking action.  “You can’t expect more than that from him!” I hear.  “He’s only 18 months 2 years 3 years old.  He’ll get there.”  They wonder why I didn’t bring you to that party, or that egg hunt, or that costume parade.  And then those same voices watch in shock as you melt down in a grocery store aisle – not because of a toy you wanted or a treat – but because someone didn’t close the doors correctly.
Some people hear the word and are grateful we said it first, sparing them the stress of wondering if we see it.  Some people send us articles and research, lists of recommended doctors.  Lollipops. Some people seemed to “know” before we did.
My first reaction was poor, no doubt about it.  I can’t pretend that I handled it with grace.
The day I heard the word for the first time, I prayed.  I tried to pray a beautiful prayer of acceptance and surrender to God’s will for you, but the only thing that came out was:  “Why?”  And it wasn’t a nice question either – it was an angry bitter one.  Why myboy?  Why our family?  Why me?  Why did every little thing in our journey to be your parents have to be so hard for us.  For you.  Those questions were the only prayer I could find in me for a long time.
But see…I didn’t know then what I know now.  And I surely don’t know now what I will know later.  It sounds like a puzzle because it is one – a complicated image with many pieces and no edge for guidance.  Every piece looks remarkably similar until it becomes obvious that something doesn’t fit.  I decided to stop asking why and I prayed for patience instead.
“Why” was a selfish plea for an answer that wasn’t coming.  But patience and the acceptance and awareness that eventually came with it answered the more important question:  “How?”
Autism is a terrifying and powerful word, but it isn’t a sentence.  We can choose to run from it, or walk with it.  We can hide in its shadows, or we can allow it to illuminate our path with the resources available in this wonderful world.  We can try to force it to make sense or, as illogical as it sounds, we can simply decide to understand.  In gratitude, and in faith, I have decided to understand. 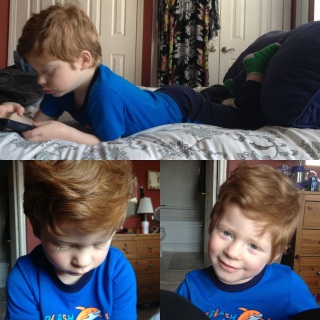 The word may not apply to you, Danny.  When all is said and done, you may never receive that diagnosis.  But the way I felt when I heard it the first time – that the world was ending and the sky was falling – is the reason why awareness is important.  So that mothers and fathers and grandparents and friends will know that all is not lost – that hope is the most powerful word of all.
*****
We have gained so much since October.  You say “I want…”, and accept “first…then…” phrases.  You say “I love you” and ask for hugs and kisses but nothing is more beautiful to me than your newest phrase, always said spontaneously:
“Mommy!  I’m happy!”
And you are.  I believe it with all my heart.
*****
We may never figure out which piece will solve your puzzle, or if it will ultimately be a word like “autism”, “spectrum” or even just “time” that fills in the gaps.  All I know is that as long as we keep working, keep laughing and keep loving the ending image will be uniquely beautiful, because it will be you.
Never before in story or rhyme
(Not even once upon a time)
Has the world ever known a you, my friend.
And it never will, not ever again.

And we are happy, Danny.

Believe it with all your heart.